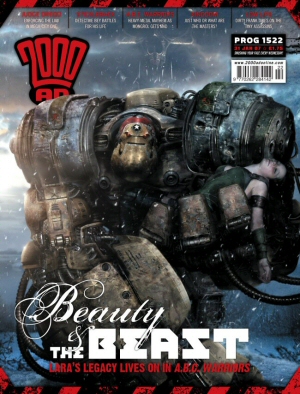 2000AD is Britain's cult sci-fi comic, and has been at the cutting edge of contemporary pop culture since 1977. It's a multi-award winning cocktail of explosive sci-fi and fantasy, infused with a mean streak of irony and wry black humour. Imaginative, hard-hitting stories and eye-popping art have made 2000AD essential reading for its legion of fiercely loyal fans.

2000AD has been a proving ground for the finest young writers and artists of the generation, and many of the biggest names in comics today honed their skills within its pages. It has become synonymous with the very finest in comics art, and has won the Best British Comic award at the UK Comic Art Awards, National Comics Awards and Eagle Awards too many times to list.

2000AD is 30 years old today and I’ve been reading it since 1977, which is kind of a little bit scary if not downright disturbing.

(This is just one of my favourite recent covers.)

Goldie at the Savoy 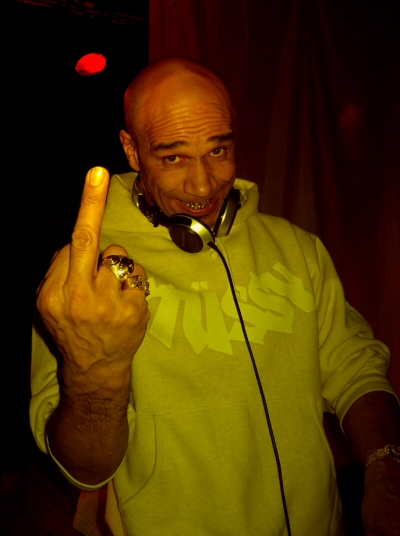 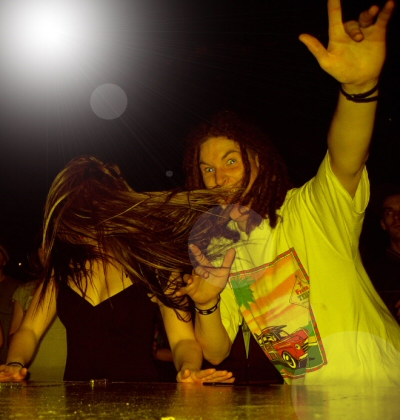 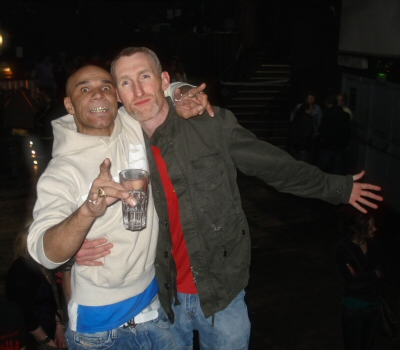 Goldie played at the Savoy last Friday, it was the night after the Bodega closing party so I was a bit wrecked and taken completely off guard when one of the door staff shouted after me and wryly told me not to be dancing on tables that evening... different venue, small town, same door staff. :-)

I was too late to see Tone Control playing their support gig and I only caught the end of Source’s warm up set but at least I made it in time for the main man. Sadly, I am a complete drum and bass addict and spent the best part of two hours gracing the floor with my fantabulous moves. Well, someone has to show these young people how to dance proper. On the other hand, I’m getting too old for this and my knees can only take so much punishment. :-)

Goldie played a nice set that went down well with the crowd but I was half deaf by the end of the night, too much bass is bad for you it seems. Anyway, why worry, DJ Deep was probably going to wreck the other half of my hearing the following night, so what the heck!

(Thanks to Pat de Butcher for the fantastic photos.)

UPDATE: If you're into drum and bass, be sure to check out the next Impact night at An Cruiscín Lán on Saturday 3rd March, check out the cool poster below. Gearoid (FiCTiON) and his buddies do a fantastic job in organising the Impact nights and truly deserve tons of support and respect. 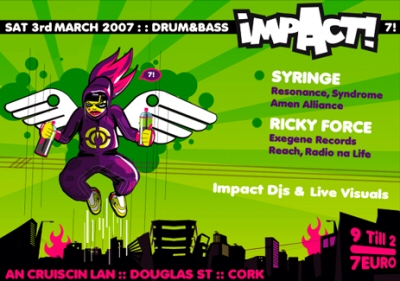 Last Call at the Bodega 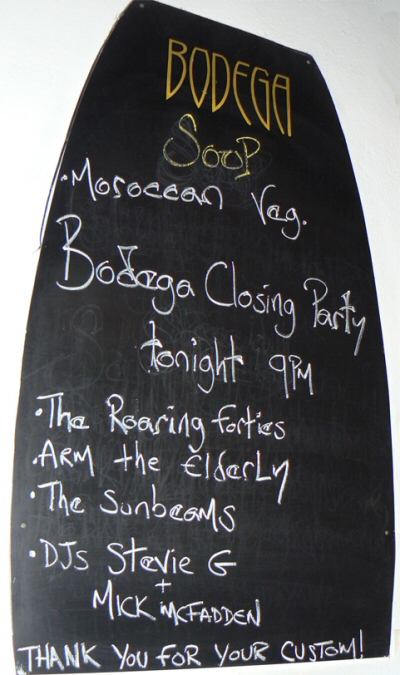 The Bodega closed last Thursday night, 15th February 2007. Now I have to admit that the Bodega wasn’t a regular haunt of mine but given that the fact that it was closing was a small bit of Cork history in the making and not to mention the fact that there were three fantastic bands and two fine dj's (as you can see from the menu) playing on the night, myself, Betty and Donal decided that we should would get off our butts and make an effort to turn up for the party.

The Roaring Forties started off proceedings and were brilliant as usual but to be honest the sound was terrible during their set, which was pretty ironic because as soon as they finished George, their lead singer, took over the sound engineering duties and obviously worked his magic as the sound was perfect for Arm The Elderly and The Sunbeams, who both played terrific but very different sets.

Sadly, Betty and Donal wimped off shortly after K and C arrived, which was a pity because things really took off afterwards. Once the dj's started playing, a few people hopped onto the bar and started dancing and soon the entire bar counter was full of dancers and then we all started dancing on the tables, which is good fun but kind of tricky at the same time. Loads of people were taking photos and videos but unfortunately the battery in my camera was dead so I didn’t get any! If anyone out there has some, I’d love to see them. Finally, the police arrived at around 2:30am and the door staff eventually threw our sorry asses out onto the street... for the last time ever.

The Roaring Forties Arm The Elderly The Sunbeams

(Thanks to Mozzer for the photo of the menu.)

# Forged from the fiery depths by Pure Cork Boy.  Go on, ya know ya wanna leave a comment! (8 have vented their spleen so far) 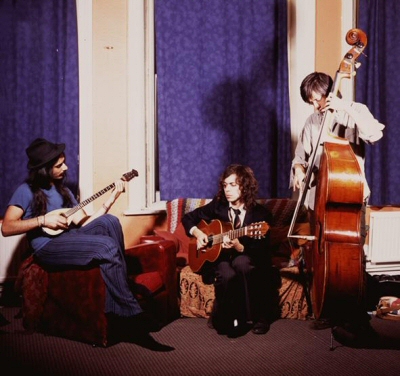 A couple of weeks ago, a group called Trio Tekke played at An Spailpín Fánac. Trio Tekke are a three piece band consisting of two Cypriot and one Anglo-Chilean musicians, who play traditional Greek Rembetika combined with contemporary reggae and Latin rhythms, although to be perfectly honest, it was all Greek to me! (*groan*)

A pleasant support act, whose name escapes me, warmed us up nicely with a somewhat eclectic set of traditional music from across Europe including Macedonian and Turkish folk songs. Eventually, Trio Tekke took to the stage with the minimum of fuss and proceeded to do their thing. The played a good mix of upbeat and down tempo tunes and at times we really wished we had bought a few plates with us just to smash on the floor although the scarcity of delph was somewhat made up for by the crazy Greek girl who entertained us all with her dancing, that and way too many Scooby Doo jokes... but I’m just too tired to explain what that was all about. 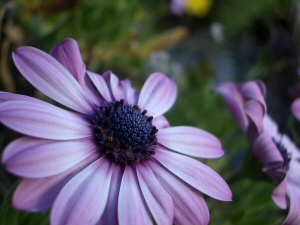 Today is Valentine’s Day and ok, it has probably turned into something very commercial and tacky but let’s not lose sight of the underlying message, which is all about love. Life can be tough at times, so what’s wrong with a day that celebrates something nice like love even if it has been hijacked by commercial interests.

Kind of on the subject of romance, last night I was a bit wrecked so I sat down in front of the tv and watched “You’ve Got Mail.” For some reason, I really like romantic comedies; maybe I’m just a sucker for the inevitable happy ending. Anyway, what could be better than sitting in front of the tv enjoying something funny that makes you laugh out loud and feel good? Well, maybe one thing I suppose... to shamelessly paraphrase Jack... watching it with someone who makes you want to be a better man.

# Forged from the fiery depths by Pure Cork Boy.  Go on, ya know ya wanna leave a comment! (13 have vented their spleen so far)

Buile Buile Cheíle at the Roundy 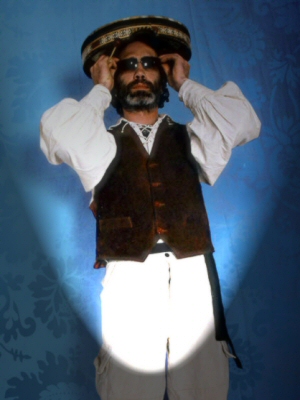 Recently I went to a new weekly Sunday night gig at the Roundy called Buile Buile Cheíle with Donal. Basically, he needed someone to hold his camera bag while he did his thing taking pictures but heh, I’m not proud and it got me out of the house. The night itself features different artists each week so you might want to pick and choose, just check out CorkGigs for details of who’s playing.

The opening gig was nothing short of an eclectic cross-cultural mix of traditional Irish, African and Latin American styles and rhythms. While all of the artists on the night were excellent, I suppose the highlight was Rónán Ó Snodaigh from the band Kíla, who is undoubtedly completely bonkers and mad as a hatter but all of the better for it, I reckon. Donal will probably have some pictures of the night up on his own blog sometime later this year but given his current photographic backlog, I’m not holding my breath!